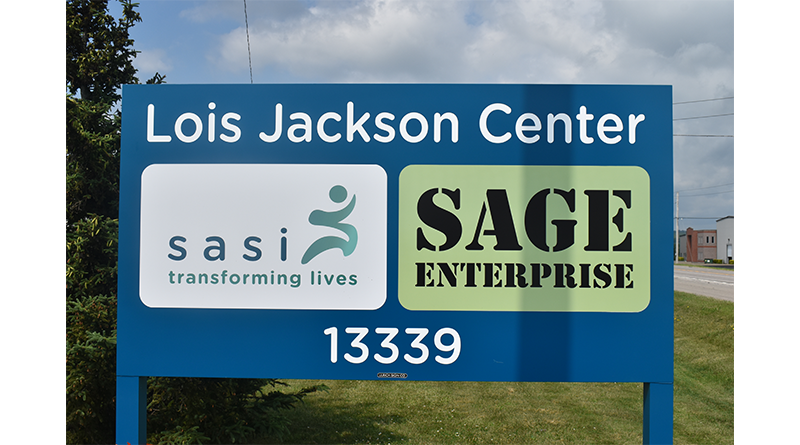 Yesterday, sasi dedicated its Sardinia facility, 13339 Route 39, to one of its founders. The Lois Jackson Center now honors a woman who guided sasi from its earliest days until her death last year.

It all started in early 1974, when a committee of three, spearheaded by Lois Jackson, saw a need to provide services for individuals with disabilities in the Southtowns. Lois was motivated by the knowledge that services for people with special needs, like her son, Darren, were nonexistent in their area after those family members aged out of the school system. In the fall, a new program opened its doors in a small garage in Springville. Three staff members provided services to the six disabled adults. By 1976, they outgrew the building and operations moved to a location in Boston, NY.

In 1979, the organization became officially known as Suburban Adult Services, Inc., and the Sardinia Work Training Center opened at 13339 Route 39, bringing sasi’s service capacity from 25 to 60. Over the next four decades, sasi’s growth continued, due in no small part to Lois’s drive, dedication, and fierce   advocacy to    provide the best services for individuals with disabilities. Lois passed away in February 2020, leaving behind a loving family, many friends, and her legacy as one of sasi’s founding members. She was a pioneer in the field of developmental disabilities and devoted her life to paving the way for individuals with special needs.

Anthony Annunziato, President and CEO: “Lois was a pioneer, visionary, and champion, whose life was dedicated to the betterment of individuals with disabilities. “We are proud to dedicate the newly named Lois Jackson Center in honor and in memory of her. This honors the tireless dedication Lois showed for more than 40 years.”

Camille Putnam, VP of Program Services and Jackson’s daughter: “I know that if mom were here, she would say that it is all about transforming lives, not only the lives of those to whom we provide support, but also the staff, who demonstrate each and every day their commitment to the sasi mission. I am sure she is in heaven, telling everyone about how there is a building with her name on it and how she will always be the mother of sasi.”

Michael O’Connor, sasi Corporate Board Chairperson: “For more than 4 decades, Lois advocated tirelessly and without fear for individuals with special needs. As “the Mother of SASi”, she founded and helped lead our organization to where we are today. It is with great pride that we dedicate the Lois Jackson Center in her name. It is our hope that every time someone passes the building and reads the name “Lois Jackson”, they will be reminded of her, and all of her hard work and countless contributions to this agency and the individuals we serve, so that her legacy will live on forever.”